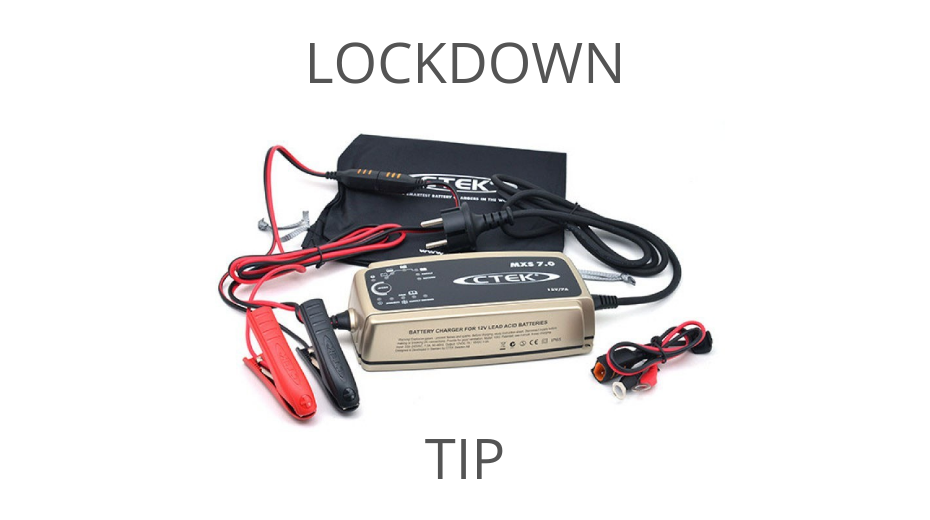 There are 32.5 million cars in the UK and 1.2 million motorbikes. How many of those are sat, parked up, with a petrolhead longingly gazing out of the window waiting for the day to return where we’re allowed to get back out in our cars to enjoy them once again. Now, don’t get us wrong, we respect the government guidance as the right decision just like everyone else – and we have the utmost respect for all those key workers keeping the country going right now – *massive high five guys*

The day will come. Be it in May, June or beyond. We’re imagining it now. Keys in hand, excitedly marching out the door, maybe there’s a good wash and detailing session to be had first?! But that second you go for ignition, you’ll feel like this is as important as the moment the engineer fired up Apollo 11 at the start of it’s successful voyage to the Moon. Joy in our hearts and excitement pulsing through our veins. Oh, it won’t start. The battery’s dead. *insert appropriate curse here* !

Battery care is something we need to know a lot about at Re:Fuel to be able to provide the utmost care to the cars stored at The Vault. We do have a bit of a secret weapon, as one of our Directors, Dan has helped manufacturers like McLaren, Jaguar Land Rover and Caterpillar develop battery charging systems for their hybrid vehicles. Some eagle-eyed petrolheads may have spotted a McLaren P1 roaming around Exeter in it’s anti-press-photo black and white swirl livery for a while back in 2013. So anyway, we thought we’d share a bit of our knowledge combined with a tip to avoid unhappy post-lockdown petrolheads!

Well I think you know where we’re going to start. If you’re hauled up at home during the lockdown, get your car battery plugged in to a charger. “Why can’t I just jump-start it once all this is over” we hear you ask? Well firstly, batteries are pretty expensive, especially if you want a quality one that’s going to last – and letting your battery drain too low is almost certainly going to cause long-term damage to it, shortening it’s life, perhaps severely. Also, many modern cars can be a little sensitive to jump-starting or jump-packs – with it not being uncommon to blow fuses or, even worse, sometimes kill sensitive and costly electronic control units. So the best practice, and least costly approach, is to just keep your battery in good condition and prevent it from being drained too low whilst your car is sat unused.

So, back to connecting that charger. The easiest way is of course just to connect a charger to your battery whilst it’s still installed in your car. If you can do this, consider whether you keep your battery terminals connected to your car. On older vehicles this is normally absolutely fine. On newer vehicles though, do check your user manual as some manufacturers now will advise disconnecting one or more of the car’s cables from the battery terminals before charging. Many people argue that those same sensitive electronic control units we mentioned above, should have been tested by the vehicle manufacturer against standard charge cycles/voltages so it would be fine to keep the battery terminals connected. But you really can’t argue with what it says in your owners manual. If you’re at all unsure, disconnect a minimum of the negative battery terminal to be safe. Another thing to consider, if your car is to be charged outside in the elements, is that you must use a charger that’s approved for outdoor use. This will be in the spec when you buy it, in the user manual and sometimes also signified by an “IP rating” somewhere on the case of the charger. The IP rating should be a minimum of “IP44”. The two digits have different meanings for dust and water ingress protection – but, put simply, the higher this number, the more weather resistant it will be.

If you can’t get a charger out to your car then remove the battery and get it on charge. Be careful where you charge your battery though. You may have heard before that you should only charge a car battery in a well ventilated area. This is because when a lead/acid battery (which the majority of car batteries still are) is charged, it releases hydrogen gas, which in the right mixture with air/oxgen can be highly explosive. These days, most batteries are “sealed” but still have a vent designed to release any gas build up when the pressure inside the battery exceeds a certain point. Therefore, if you can’t charge your battery whilst still in your car, then be very mindful of where you charge it.

As for which charger you use… well, you could connect a traditional battery charger for a while and it should help prevent the “dead battery” scenario when we’re all allowed out to enjoy our cars again. However, the best battery charger for keeping your car fit and healthy (and ready to go after lockdown!) is one that has a “maintenance mode”. A traditional battery charger will automatically (electronically) disconnect from your battery once fully charged and occasionally go back into “charge mode” to work out what the battery needs. A charger with a maintenance mode is smarter than that; it will remain constantly connected to the battery, allowing it to discharge very slightly to a healthy level before reacting and returning the battery back to its optimum charge level. Not only does this avoid the risk of overcharging your battery, but you can think of it as some very “light exercise” for your battery as if your car were in light use – which really does help keep your battery in excellent condition and considerably extend its life.

Well, we hope that was useful. Get connecting, get charging, and don’t let your moment of ecstasy get ruined by lack of energy!

© 2021 The Vault. Created for free using WordPress and Colibri